In all honesty, the work doesn’t get any easier. It’s taxing, in more ways than one: emotionally, physically, spiritually, mentally. But I would say it’s certainly worth the exhaustion that comes with it. As my friend Tracy said, the work itself is fulfilling, and I heartily agree. It makes the tiring aspects worth it.

Tiring in what way, you might be wondering? The biggest thing that weighs heavily upon me is simply the suffering that I see. When you’re walking behind a major street, a major homeless shelter, and see many people camped out, trying to make the best of their situation, all of them in rough shape, it breaks your heart and you wish you could do more. It’s by no means easy to see the magnitude of suffering that exists, right in one’s hometown. You wonder, what is the story of these people, where do they want to go with life, have they given up … questions like that. I really feel for them.

I remember when one gentleman came up to me, asking for a burrito, and he had dried blood all over his face. I remember this guy distinctly, because I was hopeful that his situation was going to improve. Of course, you never know with these things, but that was my hope and impression nonetheless: That he was a guy who was struggling, but that his situation had to improve, by necessity. You can only hope for those things. You can only hope, that someone who has dried blood on their face from unknown circumstances will be okay, that a higher power will keep them safe.

One thing I always have to keep in mind when doing this work is the importance of boundaries. Sometimes this is a good thing, though sometimes it remains taxing. What I mean by that is the following: I know better than to open up too many discussions with the people that I serve, it’s usually better to just pass out the food. This is because, you wouldn’t just go up to random strangers and start talking to them as if you knew them, and also because sociologically, a person who is homeless just needs their basic needs met. I think of Maslow’s hierarchy of needs: You need your basic needs met first, before you can engage in meaningful discussions and relationships with others. And I would say, perhaps that is what is most difficult about the work that I do. Maybe I still hold onto the notion, then, that I can give a magic pill to someone homeless, pull out my magic wand, and make everything okay again. Since I’ve been doing this work, such hope has been dashed to pieces, and that’s what makes the work increasingly, steadily difficult: The fact that I can’t open up to these people with the smoothness and efficiency that I would like. Meaning I’m kind of an optimist and Romantic if I assume I can pull out a magic wand and fix everything. Meaning, I must remain more of a realist and pragmatist in these heartbreaking matters.

That’s part of doing this work, though. You live with the consequences of difficult situations that people often find themselves in. And a lot of it, I would say, comes from a concept that I think is under appreciated in our society: Oppression, and oppression by influences of power. We take this concept and idea for granted. Oppression is a real thing. I saw it when I chose to walk behind the major street to see camps and people trying to survive, seeing people sleeping on a hard concrete ground with just a blanket to protect them, seeing people banding together to look out for each other.

Some would like to argue that oppression doesn’t exist, and to them, I don’t have a lot to say, except that I think it’s easier to say oppression doesn’t actually exist than to face reality head on. But was Marx really so wrong to say that class conflict is a thing, in that class actually exists, to say that much of our suffering comes from our obsession with (historical) materialism (i.e. production, material goods, labor, etc.)? Of course Marx had the proletariat in mind and not the homeless, but it is through these oppressive functions of capitalism that poverty and equality exists in the first place: These oppressive structures we have in place ultimately displace people and lead to oppressed people and oppressed groups that are marginalized by society and ultimately forgotten. I can’t help but think of Marx’s notion in Capital where he describes money as being the same as commodity; what this means translated philosophically is that a person cannot get their basic needs without money if everything in life is a commodity and requires money in the first place, being the essentially same thing as money (the commodity), why the economy works in the first place. It’s a difficult and precarious situation, no doubt, to limit someone’s supply to basic needs because of something as arbitrary as money, and Marx’s contributions to economics and philosophy say a lot about our current, modern situations with poverty and the poor.

I look at my own life and realize how lucky I am to not be in the exact same position as those experiencing homelessness. As the saying goes: I am just a paycheck away from homelessness. This is because our culture has designated many of us to being the proletariat, while the richer just get richer, while money (capital) becomes more and more oppressive, and we lose sight of serving the poor and looking after each other with the resources we do have at our reach.

That is one of the things I realized yesterday, as I was doing the work that I was doing: I was serving the poor, and I could say that I was serving the poor. This is a virtue. I think this is important, and important for someone like me to internalize: It is possible to serve the poor, just as we are taught in many religions to do, and that’s what I was doing with The Legacy Initiative. That feels right to me, rendering that statement true: I served and continue to serve the poor.

After the outreach, I was … exhausted. In so many ways. I had just served with people I didn’t know, I had just passed out burritos to people in a tremendous amount of suffering, I had just carried a super heavy backpack full of fresh burritos over a substantial distance, and I definitely needed to boogie on home and take a nap. My body was physically drained, and I needed to mentally recoup. But the exhaustion I felt was a phenomenal thing, because it showed me what I had just put into the world, the positive energy I had just transmitted into existence, that I had just given it my all, and no, it isn’t ever perfect, but it is always beautiful, doing a good thing and looking after others, and debunking destructive and counterproductive stereotypes. It takes a lot to go to a homeless encampment, a lot of inner resources and strength and courage, and I think that isn’t always appreciated by people who consider themselves opposed to this kind of work.

Usually I have a lot of philosophical, sociological, or anecdotal/autobiographical insight into these outreaches. But I can say this time around, I don’t, and this is for a good reason: It’s because I’ve been humbled. I didn’t get to attend the last outreach because I was in the mental hospital because of a long-standing struggle with my mental condition. My body had reached a point to where it was physically crying out for help, because my mind was essentially running me into the ground with its unchecked mania and psychosis. In the end, this turned out to be a good thing, because while I was in the hospital, I was led to the conclusion by certain staff members that the suffering I’d seen in the world, including my work with the homeless, had caused my mental illness to spiral. But I was still sad I’d missed it, because this is where I put my heart. No, this kind of work doesn’t pay the bills, as they say, and it doesn’t solve all the problems of the world, but that’s not what it’s about. It’s about making a difference where you can, and doing what you can for others.

In this way, I believe that everything will work out in the end. For those who suffer, such as the man with the dried blood all over his face, and for everyone in Legacy, who strive to make the world a better place through hard work, dedication, and tireless service and humanitarian aid. But what I must constantly allow myself to do is be consistently and thoroughly humbled. And I can happily say, I am consistently humbled doing this work. Part of that is because it never gets easier, part of it is because I have a lot of time to reflect, part of it is because I’m constantly surrounded by such loving people. All of those things are crucial, all of those things are key.

Before I close, I have to share a funny story. Tedd and Tracy and I were talking about what we’d do if we “theoretically” left someone behind during the outreach. We said this would never happen, because we were always on top of it. Jayson, in the meantime, had left his backpack behind, for Tracy to watch and keep safe in his car, and when he didn’t show up after some time, we decided we would head out. But sure enough, that’s when we heard Jayson’s voice, and the joke was on us at that moment: As Tedd said later, “So theoretically if we left someone … which would never happen …” It was funny because it shows the goodness we try to emulate, even through our mistakes and our oversights. It’s an important reminder of what we do on a regular basis to serve others, and it keeps me humbled and happy.

As the staff writer of The Legacy Initiative, with countless articles under my belt, I not only feel consistently humbled, but I write with the intention of spreading awareness, of telling my story and the story of others experiencing homelessness, and perhaps most importantly, writing to make a difference in an often harsh and brutal world. I don’t know what my writing will do in the end, but I wouldn’t do this work if I didn’t think it wasn’t beautiful, meaningful, truthful, worthwhile work that may touch a heart or two as I go along. And it’s hard work, it’s not easy by any means, but that just makes it all the more worth it, and plunges me into a happy exhaustion.

Because, we can do this: We just, we mustn’t give up. 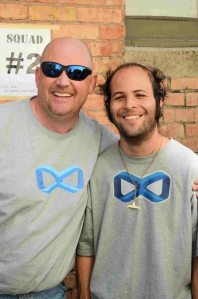